Feed the Future Partnering for Innovation is completing our second round of grant selection, and we are delighted with the heightened interest in our program. We received more than 300 proposals, three times the number received in our first round. Seeing the wide range of technologies included in the applications has given us a window into some of the trends in agricultural technology for smallholders. 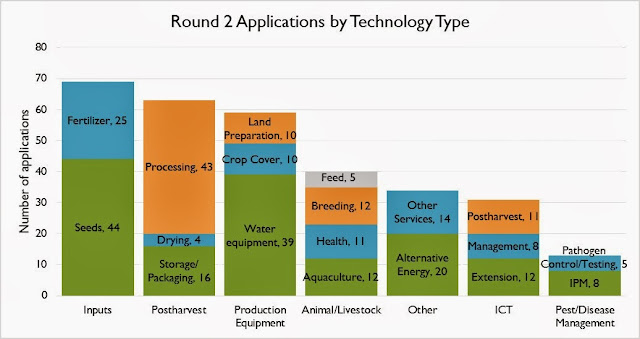 We received a good balance of technologies across the supply chain, but three areas in particular were teeming with interest in adapting and marketing for smallholders:

1. Seeds and seed technology. Whether improved seeds, seed treatment, or technologies to prevent seed fraud, our applicants have shown an increased focus on this critical input. The proportion of applications dealing with seed technology more than doubled from our first round to our second round.

2. Small-scale processing. The World Bank reported 17.5 percent of maize and 13.0 percent of wheat (by weight) is lost after harvest. Responding to this enormous lost potential for food availability and farmer income, we’ve seen a sustained interest in investments in small-scale processing that makes sense smallholder farmers to preserve and add value to their crops.

3. Water equipment. In developing countries overall, agriculture accounts for more than 85.0 percent of water utilization (IWMI 2001 in World Bank AgInvestment Sourcebook). Technologies that lead to more efficient water use, contributing to farmer crop savings, improved quality and quantity of crop yields, and increased climate resiliency, have become a major focus for the private sector and the development community alike. One technology we’re excited to see developing is solar-powered irrigation pumps.

In our pool, the most underrepresented technologies were disease and pest management technologies, which made up about two percent of the total applications. Click here for a link to a list of our current grantees.

Regionally, we’ve seen a major focus on expanding technology into Africa—two thirds of our proposals came from enterprises in or that are targeting sales to Africa, with East African, especially Kenya, presenting a multitude of innovative ideas. The Economist, CNN, and the International Business Times are all telling us that Africa is the next frontier for everything from Information Technology to startups to grocery retail. Our applicants seem to be thinking the same thing.

Look out for a new call for proposals that will be announced in early 2014!

Knowledge Sharing on the Path to Self-Reliance

Feed the Future Partnering for Innovation works with private sector partners across the globe to commercialize new technologies and services for smallholder farmers. Our approach of building capacity at the business level is a key component of USAID’s Journey to Self-Reliance, and we find Agrilinks...
Agrilinks Event

Research institutions around the world are developing products to address some of agriculture's most pressing challenges, from life-saving livestock vaccines to pest-fighting hermetic storage bags. How can researchers work with the private sector to make sure that products both meet the real needs...
Blog/News entry