Anacleto Albino, locally known as Inhambane, is a role model in Mogovolas who feels he was born with a very special gift — the talent of being a farmer. Regardless of all challenges related to agriculture, he never gave up on his carefully chosen profession and dreams of instilling this passion in his children, for them to appreciate the self-sufficiency that a farmer can achieve. According to Anacleto, “A dedicated and successful farmer doesn’t depend on anyone to have a good and healthy life because all needed goods come [directly or indirectly] from the ground.”

Anacleto’s contagious passion and dedication to motivate others not to give up on agriculture made him become a focal point of the USAID-funded Feed the Future Mozambique Improved Seeds for Better Agriculture (SEMEAR) project. In contrast with the majority of farmers who fear experimenting with new agricultural technologies, he immediately volunteered to test improved seed varieties and best crop management practices in his fields. Since then, Anacleto’s sesame and cowpea production has increased sharply, and numerous local farmers are applying SEMEAR improved agricultural technologies. 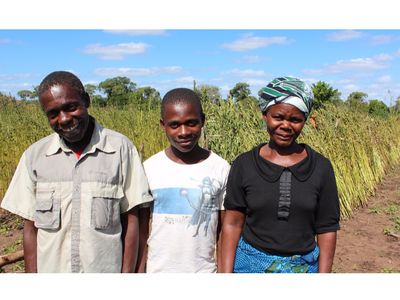 Farmers used to plant sesame by mixing sand with 5 kg of grains and harvest up to 800 kg on one hectare. During the 2015/16 season, they only needed 3 kg of improved seeds to produce up to 2 tons of sesame per hectare. In addition to almost 200 percent increase in yields, some farmers are multiplying seeds and selling them at 150 Meticais per kg — five times more than the price of the grain.

For cowpea, Anacleto affirmed that initially farmers were apprehensive when observing the thin leaves of the improved variety IT18, but in the 2016/17 season they discovered that it is 2.5 times more productive (1.7 tons/ha) than local grain, tasty and “fills the pan.” Similarly, the improved groundnut varieties being promoted produce more milk and oil.

Before becoming a SEMEAR partner in 2015, Anacleto owned 3 hectares of farm land. Since then, he has increased his fields and is gradually allocating more land to SEMEAR improved agricultural practices because he personally confirmed the benefits of applying the technologies. In fact, during the 2015/16 season, Anacleto allocated half a hectare for sesame production under SEMEAR. The following season, he was able to farm 5.5 ha of land, 1.5 ha of which were allocated to SEMEAR sesame and cowpea improved varieties and practices. In the 2017/18 season, Anacleto aims at allocating 2 ha of land to SEMEAR sesame and cowpea, and desires to initiate the production of groundnut varieties as well.

Anacleto’s credibility has increased due to frequent trainings that he received from SEMEAR, and his life is gradually changing. With the seed income his children are able to pursue their studies, and he purchased a bicycle and sofas for the whole family to comfortably watch his recently bought TV. His entire family applies SEMEAR improved technologies, and he dreams of purchasing a tractor, enlarging his seed production, and then hiring labor and training them on improved agricultural practices. 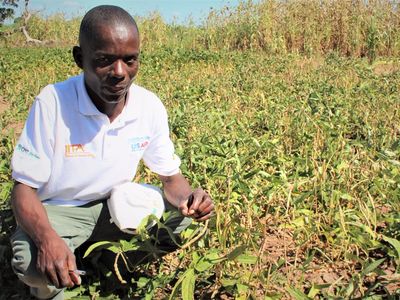 Moreover, Anacleto strongly affirms that SEMEAR is different from other aid programs because farmers learn how to commercialize their produce instead of depending on the project itself to sell the seeds. With this approach, farmers learn to be more pro-active and independent.

Nowadays seed multipliers in Mogovolas are able to properly store the seed they produce for planting in the following season. Moreover, many other farmers no longer struggle to find locally improved sesame, cowpea and groundnut seed.

Treat Farming as a Serious Profession

Telma and Américo Sinsseque live in Namiro community in Northern Mozambique, and they believe that every farmer has a chance to come out of poverty. The secret is just to “treat farming as a serious profession.”
Post

Learn what happens when 12 women multiply seed to help their community in northern Mozambique.
Post

Cecília João is a mentor and inspiring leader in Teterrene. Her path to success began in 2015, when Associação das Mulheres Olhasana (AMO), the local female association that she co-founded, began fighting aflatoxin through the USAID-funded project Aflasafe. Community farmers then began working...
Leave feedback