A Bumper Crop in Bangladesh: The Vegetables are Flourishing, and the Women are Building New Lives

Shoroma Rani Mondal’s small walled garden in Munshiganj, Bangladesh is full to bursting. Taro, chilies, cucumbers and guava flourish. Bottle gourd vines curl around nets strung from one end of the yard to another, and they’re sagging now because the vegetables are almost ready for harvest. Mondal’s vegetable garden is just one of many positive changes in her life these days. But without it, the other changes wouldn’t have happened.

“I used to have a hard life. I went to the river to catch fish and to the forest to collect firewood,” says Mondal, sitting with neighbors and friends on the front porch of her house. “If my husband and I didn’t go to the forest for a day, we would starve. Our children did not go to school.” The forest is the nearby Sunderbans, the world’s largest mangrove forest, a protected area where some of the last Bengal tigers still roam, creating a group of women known as “tiger widows.” 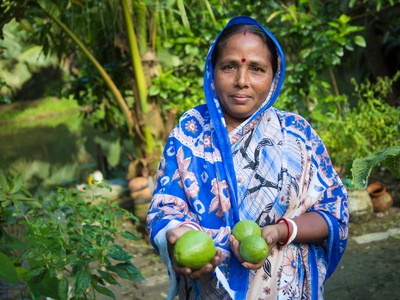 Four years ago, Mondal received training from the USAID Climate Resilient Ecosystem and Livelihood project (CREL), implemented by Winrock International. She learned to grow vegetables in a tower — tall sandbags filled with layers of organic material and fertilizer. “I can cultivate vegetables year-round now, not just three or four months of the year,” says Mondal, pointing to a bright-green-leaved taro plant spilling from a sandbag. Because the plants have no contact with the soil, they’re protected from floods and salinity. “Ten days ago, we had heavy rain and everything was under water, but since my vegetables were growing in bags, they survived.”

CREL works in four ecosystems and three ecologically critical areas of Bangladesh and has created diversified incomes for 500,000 people and 50,000 households. It has focused much of its work on women, empowering them with knowledge and encouraging their participation in community organizations. Mondal’s work was honored with the Standard Chartered Bank’s Agro Award two years ago, which came with a check for more than $6,000.

Mondal’s produce is so popular that she doesn’t have to go to the market. Buyers come to her, and she gets a premium price for her fresh, organic produce. Neighbor women noticed Mondal’s bountiful harvests and the fishpond she started with its proceeds. Mondal was happy to share knowledge with her neighbors, who soon took advantage of CREL training themselves.

Now Mondal’s neighbors are growing their own fresh, organic vegetables, and, like Mondal, are becoming their own “brands” with buyers coming right to their doors. Now they’re cooking more nutritious meals for their families, sending their children to school and using the money they earn from vegetable sales to start a fish pond, a poultry farm or to keep bees. 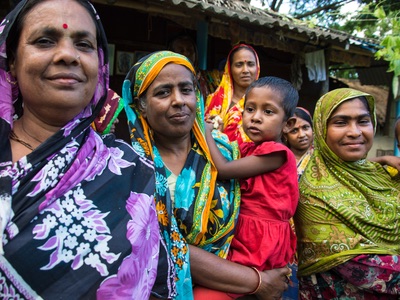 As the women bonded over their new vegetable gardens, Mondal — who became a local service provider, deputized by CREL to provide advice to others — instituted monthly meetings where they could trade seeds and troubleshoot gardening problems. Soon they came up with another idea: pooling their funds to start a savings group called Mothurapur Shabji Dol (Mothurapur Vegetable Group). Now the account has grown as plump as the produce. With each of the 18 women depositing less than a dollar per month, they’ve saved more than $1,300 that they parcel out in $100 loans for members to buy chickens or fund home repairs. No interest is charged and the money is back in the bank in six months.

Mondal and her neighbors have upgraded their houses from mud to wood, and their youngsters are now in school. They depend less on the river and forest for their livelihoods. “I’m planning to educate my children so they can live a better life than the one I have now,” says Mondal’s neighbor Shanaz Begum, who holds her young daughter as she talks. But life is already better than Begum could have imagined. “In the beginning, people would tease us,” she says about the sandbag vegetable cultivation. “They said, ‘You’re insane. You cannot grow vegetables like that.’ But now, every month I have visitors coming to my house asking how I did this.”

As a U.S. agribusiness, Land O’Lakes, Inc. may not be the first thing that comes to mind when you hear "coconuts." But for us, Feeding Human Progress comes in many...

Once considered a survival food during times of drought or severe rains, sweet potato cultivation is quickly turning into a lucrative business opportunity for entrepreneurial farmers while promoting forest conservation...

Winrock’s CREL project worked with the government, people and local NGOs to improve the conservation of ecologically significant areas such as Baika Beel by improving policy, strengthening local governance of...

This post was written by Chris Warren. When Kumar Thapa was a young boy growing up in the green, rolling hills of midwestern Nepal, he knew exactly how he wanted...