The recent surge in protectionist trade measures around the world has revived debates about who benefits in the end from tariffs on, say, steel or soybeans. Tariffs are just one of a much broader range of policies that affect incentives for domestic producers and consumers. For example, in agriculture, tariffs on soybean imports may coexist with input subsidies or direct income support to grain farmers or subsidies on milk prices to protect consumers. What is the net effect of these multifaceted policies on producers and consumers?

The Agricultural Incentives (Ag-Incentives) Consortium provides a database with common and well-defined indicators to identify how this array of policies—their incentives and disincentives—adds up to affect suppliers and consumers of agricultural products. The data show how governments have enacted polices in reaction to changes in world market conditions and food price crises.

Figure 1 shows average global Nominal Rates of Protection (NRPs)—a measure of the difference between the farm gate price and a reference “free market” price that would exist without government protections—for the agricultural sector. This reference price is computed by adjusting the border price, assumed to be free from domestic agricultural policy distortions, for distribution, storage, transport and other marketing costs to make it comparable to the farm gate price. This difference offers a measurement of the degree to which policies act as incentives to farmers. For comparison, the graph also shows the FAO Food Price Index.

Worldwide, NRPs for the agricultural sector show some annual fluctuation, but overall have been on the rise since 2008. 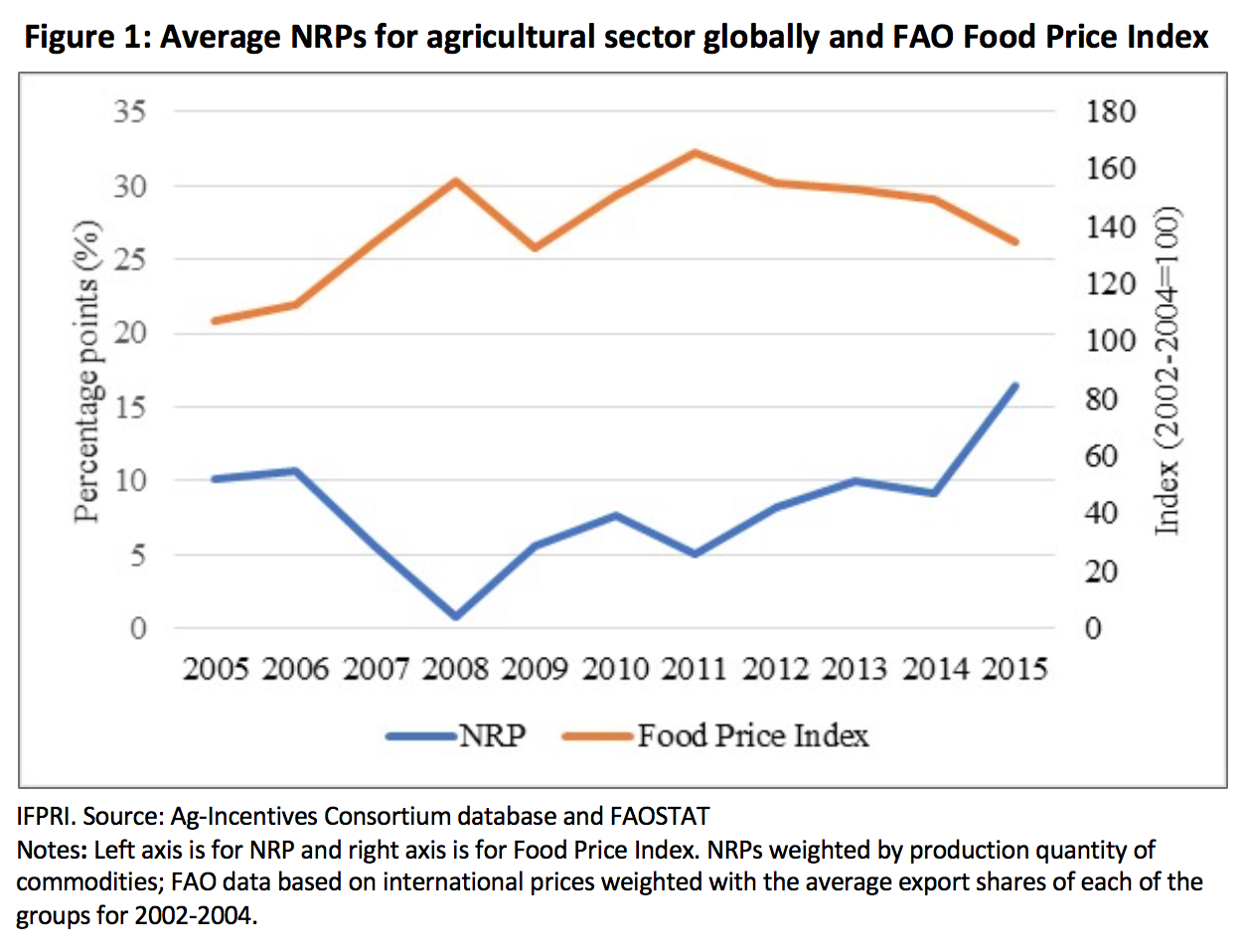 Between 2005 and 2015, NRP values were positive, indicating that agricultural policies protected farmers overall. During the 2008 and 2011 food price crises, average NRPs fell as policymakers saw less need to protect farmers during spells of high world market prices. This response may have been somewhat self-defeating, as some studies have pointed out, due to collective action problems: The decline in protection led to higher demand for agricultural products, causing prices to rise even further. 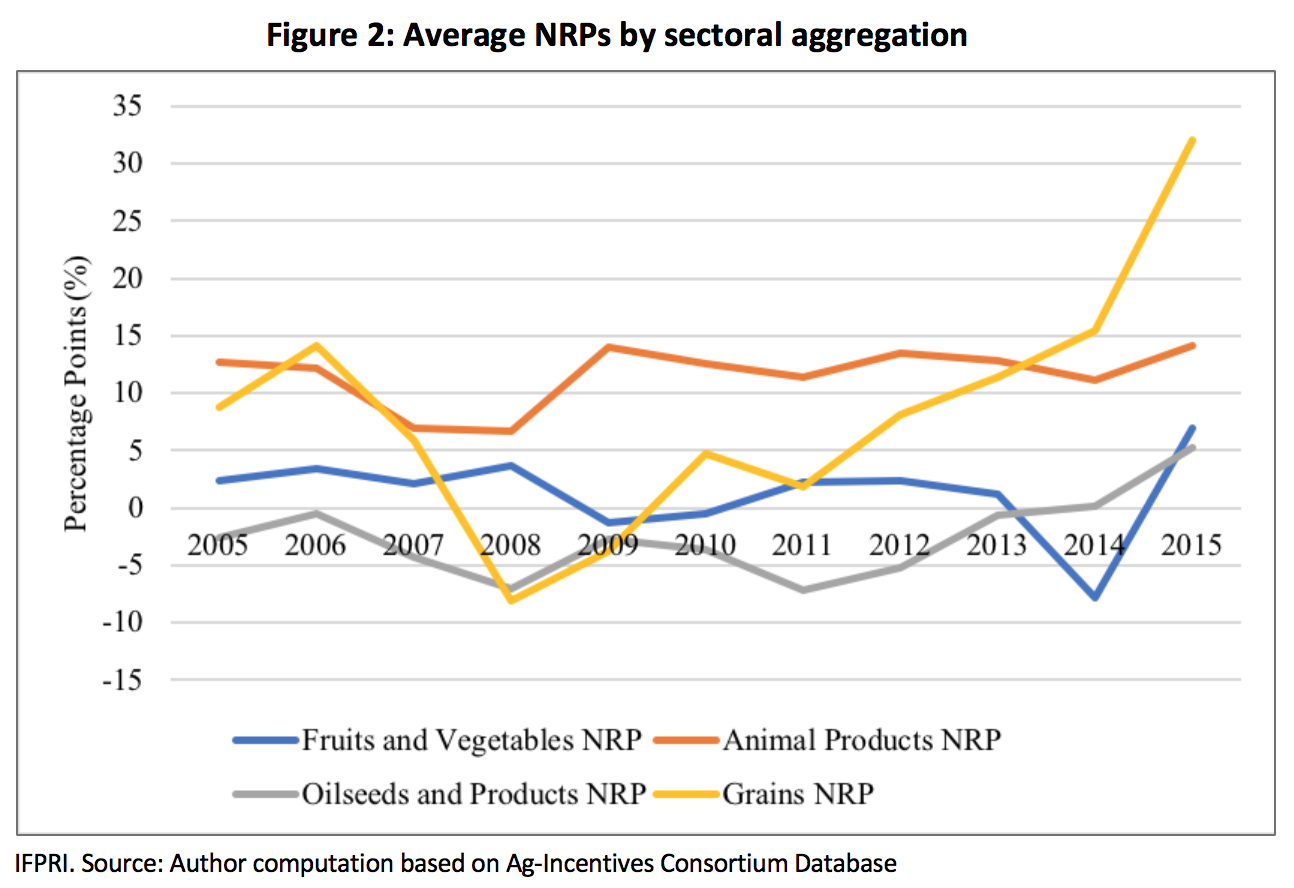 These annual fluctuations appear stronger than those for the agricultural sector as a whole. Worldwide, producers of animal products receive more protection on average than producers of other agricultural products—producers of oilseeds and fruits and vegetables, by comparison, receive much less support. NRPs for grains show the largest annual variation—and the largest recent increase. During the 2008 world food price hike, NRPs declined in general and even turned negative for grains and oilseeds; governments were quick to move to protect consumers in the face of rising prices for staple crops.

It is important to note that incentives to producers as measured by NRP vary by a country’s income levels; high income, middle income and low income countries pursue different policy goals. The Ag-Incentives Consortium database also presents NRPs by income category for each commodity, highlighting the variation in countries’ policy objectives. In this way, the global consolidated database provided by the Ag-Incentives Consortium allows stakeholders to monitor broader policy implications.

NRPs show only a part of the support received by the producers; the Consortium is attempting to expand the coverage of its indicators beyond NRP. This expanded database would further help policymakers in the optimal design, monitoring, and evaluation of agricultural policies.

Established in 2013, the Ag-Incentives Consortium includes the Organisation for Economic Co-operation and Development (OECD), the Food and Agriculture Organization of the United Nations Monitoring and Analysing Food and Agricultural Policies program (FAO-MAFAP), the Inter-American Development Bank (IDB), the World Bank, IFPRI and the CGIAR Research Program on Policies, Institutions and Markets (CGIAR-PIM). The Consortium’s main goal is to allow policy makers and researchers to assess the effectiveness of agricultural policies based on a harmonized database and unified measurement of policy incentives and distortions.

A new model offers lenders a way to assess hard-to-quantify factors, such as group entrepreneurial spirit, in assessing microfinance loans.

Sub-Saharan Africa (SSA) has experienced an unprecedented rise in acute food insecurity (AFI) since 2015 due to conflicts, climatic, and economic shocks. The COVID-19 pandemic is expected to exacerbate AFI...