However, brinjal is highly susceptible to the fruit and shoot borer (FSB) pest. FSB is a moth whose larvae bore into the stem and fruit of brinjal. Infestations can lead to yield losses as high as 86 percent [1], a devastating hit for smallholder farmers with whom Feed the Future works. To fight this pest, farmers spray their crops heavily with toxic pesticides. Studies have found that farmers spray from as few as 23 times to as much as 140 times per season [2]. This intense amount of spraying can have harmful effects on the health of farmers, their families, the consumers of the fruit, and the environment. 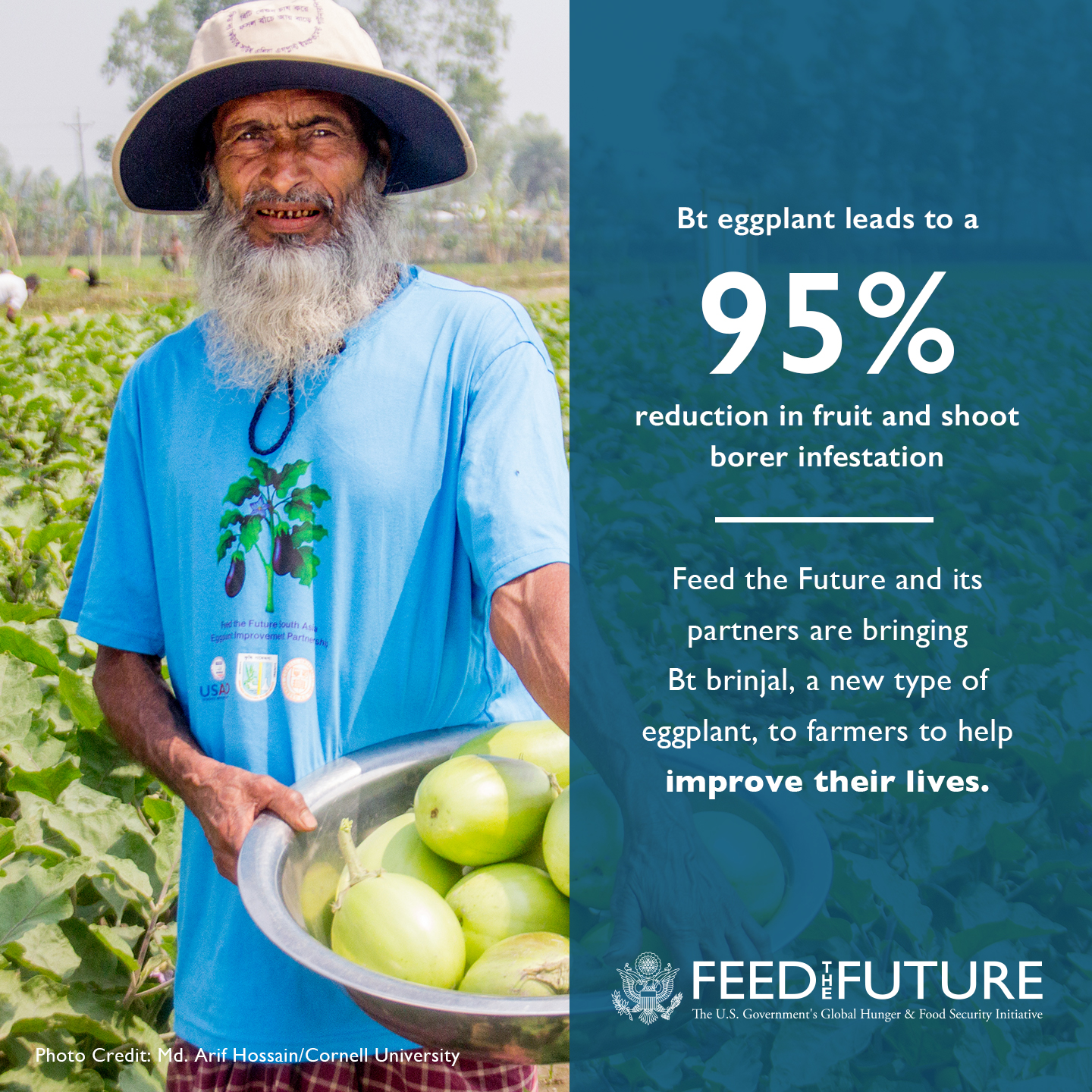 Testing the efficacy of Bt brinjal

The study shows exciting results of how Bt brinjal can lead to real improvements in the lives of farmers.

Bt brinjal leads to a:

Scaled up, these results imply that the cultivation of Bt brinjal could prevent the application of over 230,000 liters of pesticide nationwide.

How the study worked

IFPRI designed a randomized controlled trial (RCT) study to estimate the impacts of Bt brinjal in four districts in northwest Bangladesh where winter brinjal cultivation is prominent, physical infrastructure is relatively good, and the brinjal markets are well-functioning. Bt brinjal-4, the variety tested in this study that grows round green eggplants, is one of four Bt varieties that has been approved for cultivation in Bangladesh.

Farmers in the study planted their brinjal on 10 decimal plots, equivalent to 0.04 hectares or 400 square meters, in November 2017. All farmers received a small package of inputs including fertilizers, pheromone traps, sticky traps, and netting to prevent birds from eating the fruit with a value of about $24. None of the farmers received pesticide.

Replicating what would happen during the scale-up of Bt brinjal, farmers who received Bt brinjal seedlings and those who received the conventional ISD-006 seedlings were trained on the same integrated pesticide management practices by DAE officials. Farmers growing Bt brinjal also received guidance from BARI and DAE on maintaining a non-Bt brinjal border, a line of conventional brinjal grown around the Bt-brinjal plants, to help prevent insects from developing resistance to Bt.

IFPRI collected data from farmers before the study (baseline) and following the harvest season in July 2018 (endline).

A dramatic reduction in FSB infestation

At endline, the study not only showed that the Bt brinjal variety dramatically reduced FSB infestation, but it also showed reductions in pesticide use and increases in productivity and profits.

At baseline, all farmers reported an FSB infestation rate of 35.5 percent for the previous season.[3]

Not only did the Bt brinjal ward off FSB, but it also showed lower levels of infestations from other beetles, aphids, mites, and pests. 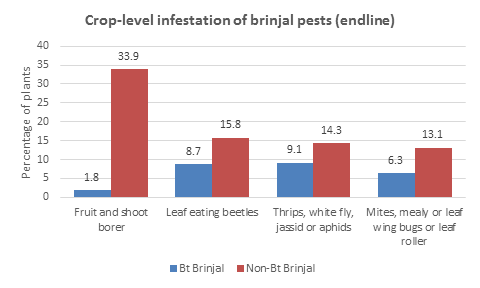 Note: The differences in crop-level infestation between Bt brinjal and non-Bt brinjal plots are statistically significant at the 1% level. 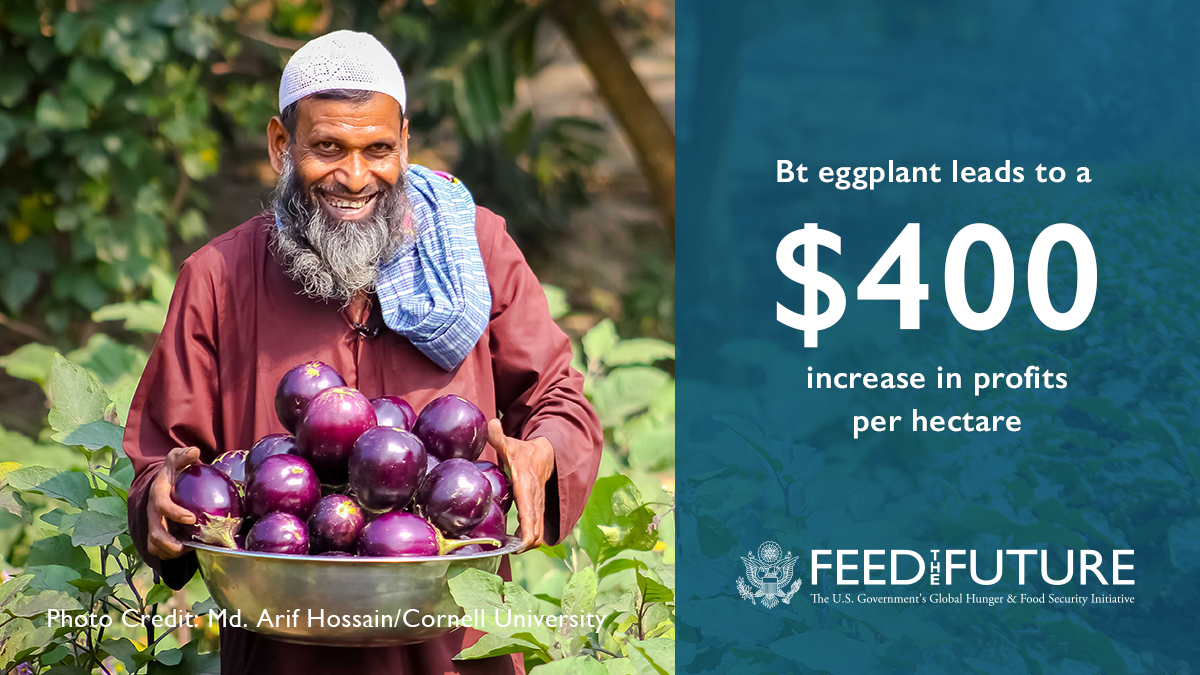 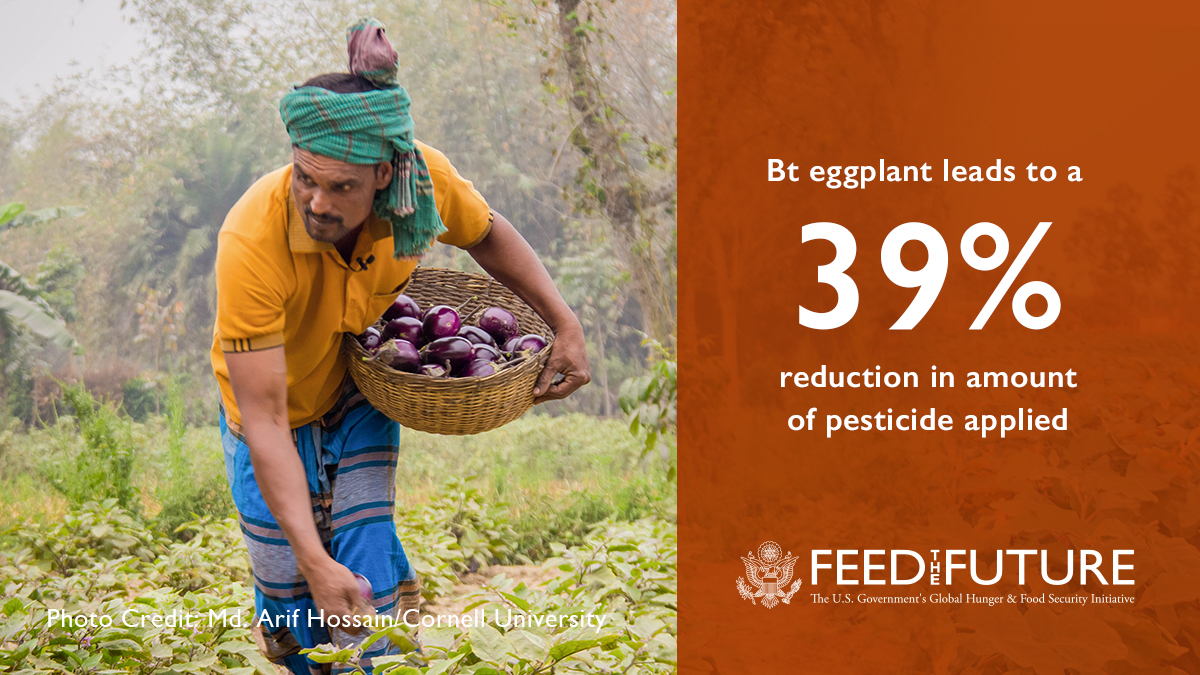 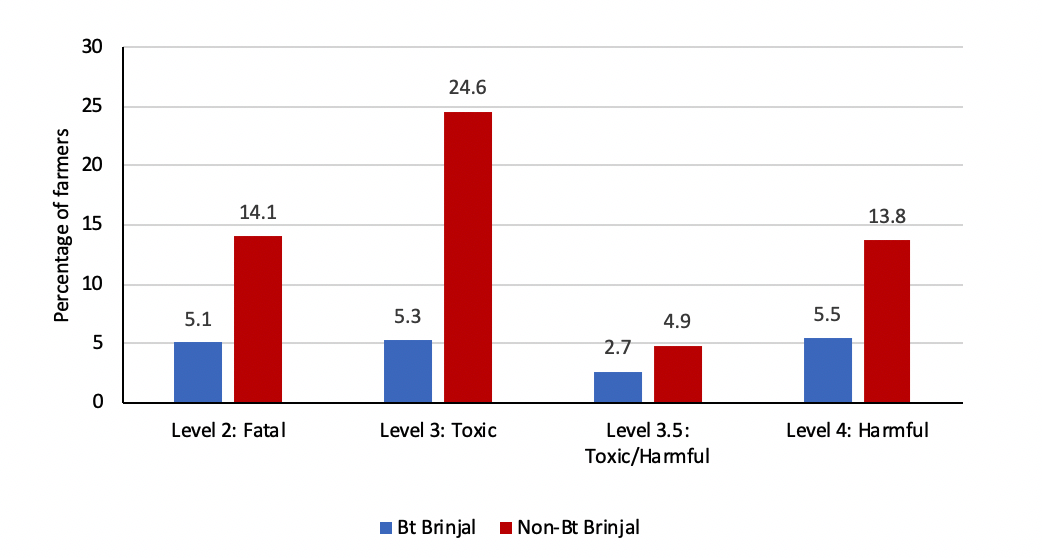 The decreased use of pesticides among Bt brinjal farmers saved them money and lessened exposure to toxic pesticides for themselves, their family and the environment.

It cost Bt brinjal farmers $113.87 per hectare less to grow Bt brinjal. Much of the 31 percent reduction in the cost of growing a kilogram of brinjal is due to reduced pesticides.

Farmers earned an additional $400.41 per hectare in net profits. This 13.9 percent increase in profits is due primarily to savings from decreased pesticide cost and increased the productivity of Bt brinjal.

A reduction in symptoms consistent with pesticide exposure 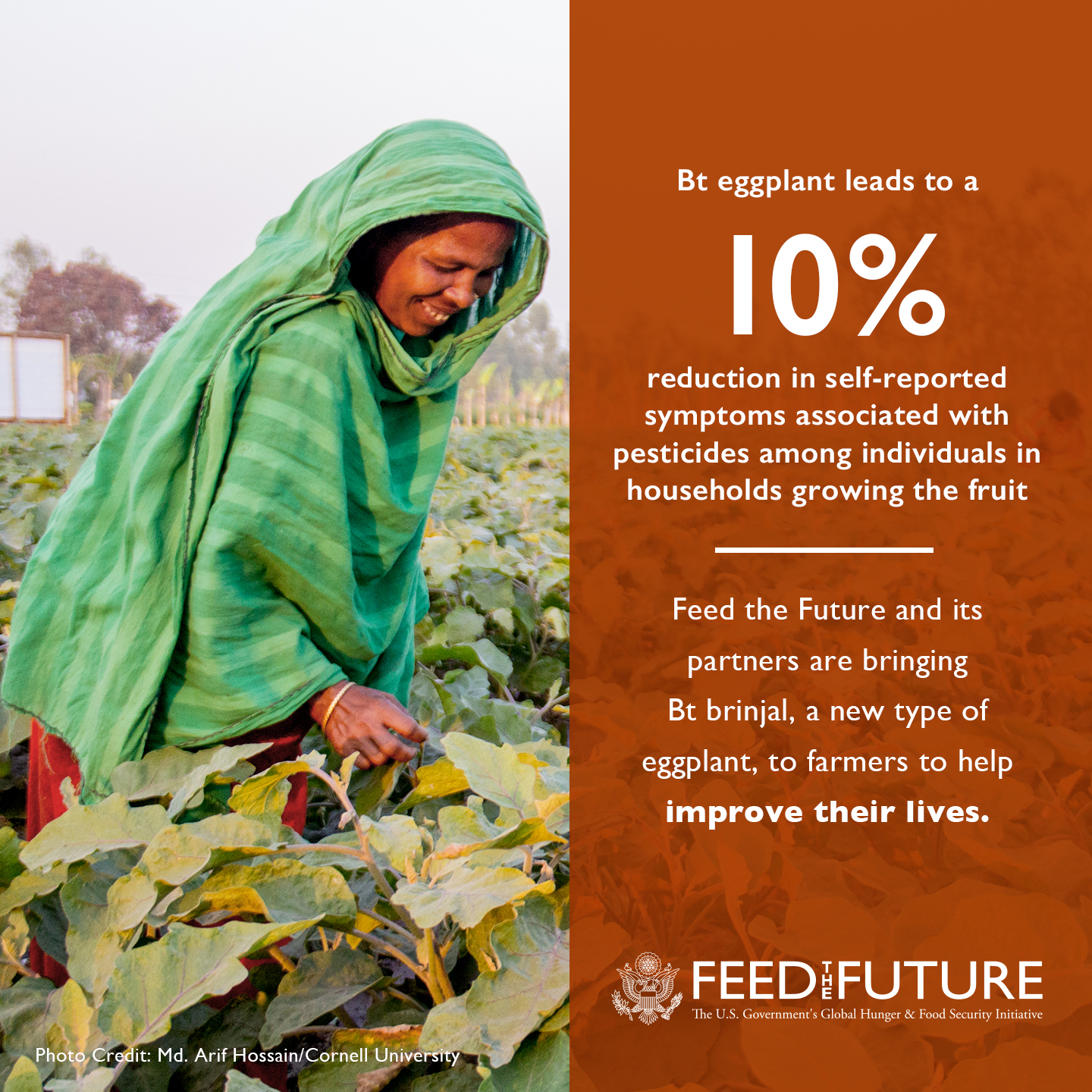 Smallholder farmers in Bangladesh face constant challenges. From worsening natural disasters to depleted soils, there are frequently unexpected and expected obstacles. But for farmers who have been consistently devastated by the FSB, Bt brinjal holds promise to improve their lives, from bettering the health of their families and community and increasing their profits to lessening the impact on consumers and the environment from pesticides.

Bt brinjal could have long-term, positive impacts on the food security and health of people in Bangladesh.  While the impact study results were subject to various factors during the years assessed (2017-2018), and both year-to-year and geographical variations in weather, precipitation, and other factors influence brinjal performance, if these estimates are extrapolated on a national level, reduced pesticide costs could save farmers over $2.7 million and net profits could increase farmers’ income by over $14 million.

[2] Rashid, M.H., M. Mohiuddin, and M.A. Mannan. 2008. “Survey and Identification of Major Insect Pest and Pest Management Practices of Brinjal During Winter at Chittagong District.” International Journal of Sustainable Crop Production, 3(2): 27–32.; Dey, N.C. 2010. “Use of Pesticides in Vegetable Farms and its Impact on Health of Farmers and Environment.” Environmental Science & Technology (II): 134–140.; Sabur, S.A., and A.R. Molla. 2001. “Pesticide Use, its Impact on Crop Production and Evaluation of IPM Technologies in Bangladesh.” Bangladesh Journal of Agricultural Economics, 24(1-2): 1–18.; Ahsanuzzaman, and D. Zilberman. 2018. “Bt Eggplant in Bangladesh Increases Yields and Farmers’ Incomes, and Reduces Pesticide Use.” ARE Update 22(2): 5–8. University of California Giannini Foundation of Agricultural Economics.;Raza, M.S. 2018. “Present Status of Insecticides Use for the Cultivation Of Brinjal in Kushtia Region, Bangladesh.” International Journal of Engineering Science Invention, 7(1): 44–51.

[4] The difference in plant-level infestation between Bt brinjal and non-Bt brinjal plots is statistically significant at the 1% level.

[5] Net production is quantity harvested in kg minus fruit discarded for any other reason, including damage due to pests or other diseases.

Note: the research has been submitted to a peer-reviewed journal but has not yet been accepted for publication.

Additional information can be found at:

Farmers in Bangladesh achieved significantly higher yields and revenues by growing insect-resistant, genetically engineered eggplant, according to a new study.

Timely and accurate data on local-level food security outcomes is key to both targeting interventions to populations in need, and to understand whether interventions had their intended benefit. Unfortunately, reliable...

HEARTH (Health, Ecosystems and Agriculture for Resilient, Thriving Societies) begins with $50 million of USAID cross-sectoral investments in conservation, agriculture, health, governance, and other sectors, spread across landscapes in six...