If you haven't figured it out by now, I'm all about segmenting because it's hard for me to understand something without a reference point or comparison.

For example, how can you understand the size of something in a picture without comparing it to something else? Have you ever put a banana in a picture for perspective? Well, you could say I’m always looking for the banana.

As usual, I planned on writing one blog on funds, but it turned out to be too long. So, you guessed it, it became a miniseries.  In this case, a three-part miniseries.  Highlights of part 1:

As a starting point, I'll be using this report from the Food and Agriculture Organization of the United Nations (FAO) that segments 63 funds representing $7.1bn in assets under management (AUM) (hat tip to Samuel Ledermann from The George Washington University (GW) who originally pointed this report out to me).  ISF also does a segmentation of agricultural investment funds that is a little more sophisticated, but which is also a little bit more difficult to understand, at least for me.  One thing I do like about ISF is that they have put their funds into a database online. On the other hand, I had to type in all the data from the FAO report into a spreadsheet myself. If anyone wants a copy, I can clean it up and share. (If Calvin Miller, the  FAO report author, happens to be reading this, I wonder if he would be willing to share his spreadsheet?)

First off, the FAO report has a nice graphic on page 59 depicting the missing middle, i.e., the financing gap between microfinance and bank lending, targeted by Aceli Africa (agricultural small- and medium-sized enterprises (agri-SMEs)).  One Acre Fund focuses on the bottom right (smallholder farmers). I think it's interesting that venture capital and private equity are grouped together with banks, i.e., they do not target the missing middle either.

The first publication I can find of this graphic is from this 2009 article coincidentally written by Aceli founder, Brian Milder, from when he worked at Root Capital. 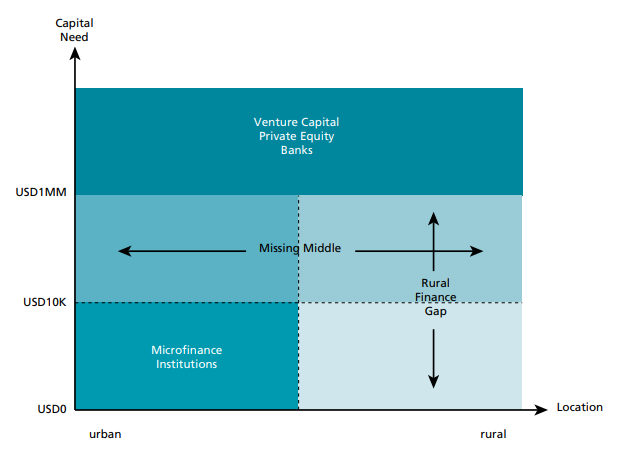 The FAO report segments funds into five “types,” which I summarize below. 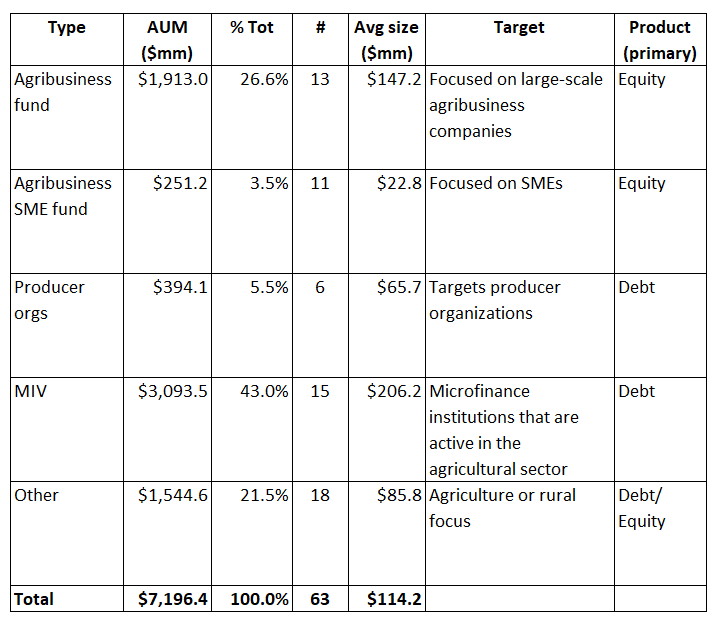 In the table below, I've included an example fund for each type (based on the FAO report’s categorization), examples of investors in the fund and an example deal that the fund has made. 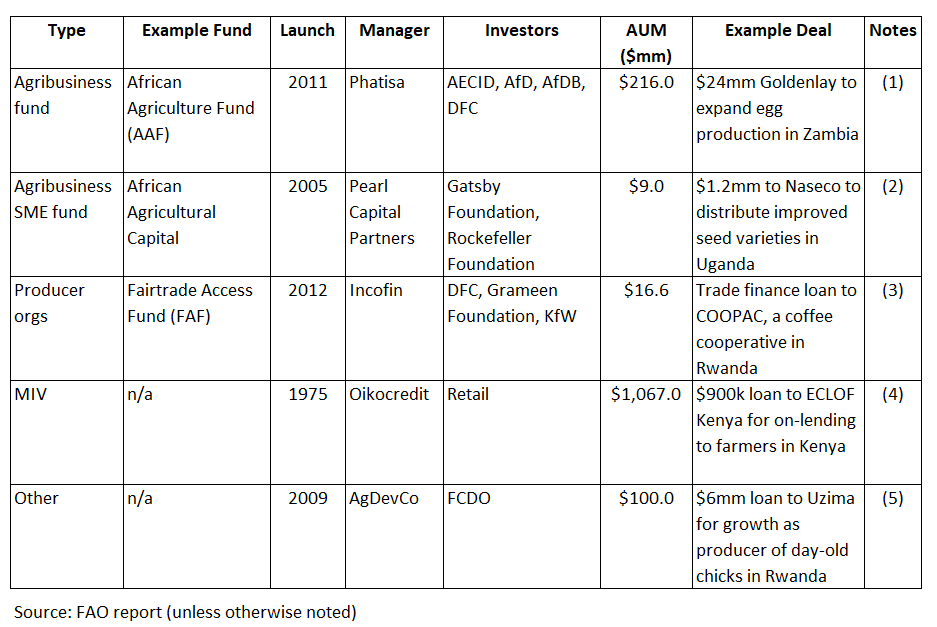 The above table also highlights two different ways organizations can be structured to channel capital.

The chart below is the organizational structure for Microvest, a microfinance fund manager, from a 2013 case study.  I chose to use them as an example because I am familiar with them from my previous job at Calvert Impact Capital (they were also recently acquired by DAI).  The chart looks complicated, but you can just think of the yellow circle as the fund manager and the green boxes circled in red are the separate, individual funds they manage. Each fund has its own investment strategy and investors, though there may be overlap of both between the funds. 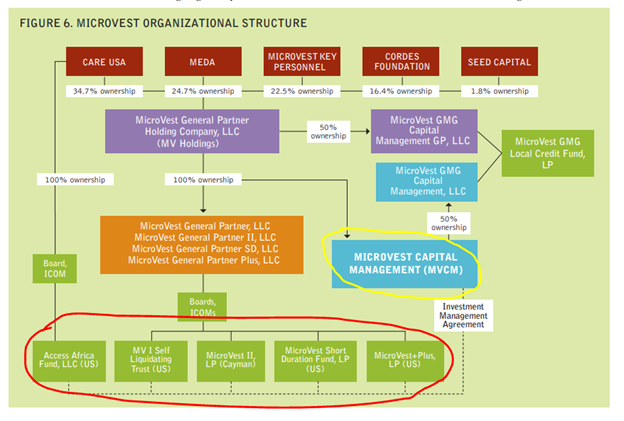 There is another interesting difference between fund managers and balance sheet lenders. Fund managers, like Phatisa and Incofin, are typically privately owned and for-profit.  Any profit they make goes to the shareholders of the fund manager. Neither AgDevCo or Oikocredit are structured as for-profit. AgDevCo is structured as a “not-for-profit distribution organization” in the UK, so any profit is reinvested rather than distributed to shareholders. Oikocredit was established “to provide churches and others with an alternative investment instrument, directed at the interests of the poor” and is structured as a cooperative in the Netherlands.

The Foreign, Commonwealth & Development Office (FCDO), an investor in AgDevCo, is an interesting case. The AgDevCo investment was originally made by the UK Department for International Development (DFID). Later, DFID was merged with the Foreign and Commonwealth Office to create FCDO.  From my understanding, that would be the equivalent in the U.S. of USAID (DFID counterpart) merging with the U.S. Department of State (Foreign and Commonwealth Office counterpart).