In part 1 of this three-part miniseries on funds, we went over a segmentation published by the Food and Agriculture Organization of the United Nations (FAO). Here in part 2, I share my own simplified segmentation. Some questions:

Below is the simplified segmentation I put together with some examples. 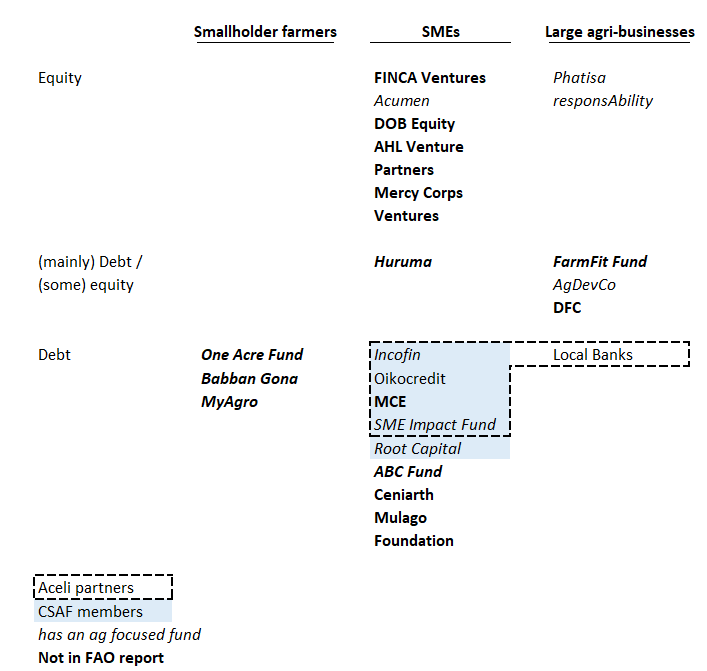 This was not meant to be as comprehensive as the FAO report, but I am constantly thinking about how to try to organize this space in my head and would be curious to hear your comments and ideas on how you would segment.

Indirectly through a cooperative agreement with a Washington, D.C. bureau

Aceli Africa is a data-driven market incentive facility. Aceli works with lenders, both international and local, in four countries in East Africa. Aceli provides incentives that both decrease the risk and increase the profitability of the loans to agricultural SMEs. Aceli itself is not a lender, i.e., USAID’s money goes to Aceli and then Aceli provides the incentives to their lending partners.

USAID made a $10 million commitment through what we call a cooperative agreement, i.e., a grant with substantial USAID involvement. The agreement is between the Bureau for Resilience and Food Security (RFS), where I work in Washington, D.C., and Aceli. USAID contracts must be bid competitively, i.e., through requests for proposals (RFPs). On the other hand, cooperative agreements can have a notice of funding opportunity (NOFO), or you can apply under an annual program statement (APS). Aceli applied under the Global Development Alliance (GDA) Annual Program Statement (APS), which takes applications on a rolling basis.

As a comparison, the Kenya Investment Mechanism (KIM) was a contract that was competitively bid (won by Palladium) and funded by a local USAID mission (Kenya). Both KIM and Aceli were funded for five years.

MCE Social Capital, the Farmfit Fund and Root Capital all have a USAID-sponsored DFC guarantee, i.e., they have substantial USAID support and were executed by the Mission Transaction Unit (MTU), which is the USAID transaction window at DFC.

One Acre Fund received a grant from DIV to expand their work in Uganda and Malawi. DIV sits in another bureau than mine, the Bureau for Development, Democracy, and Innovation (DDI), and accepts applications on a rolling basis.

Through an RFS buy-in to a USAID Washington, D.C. centrally managed mechanism

Both FINCA Ventures and MCE received an award through an RFS buy-in to the INVEST mechanism. There's a lot to unpack here.  More on INVEST later, but basically RFS put some of its budget into INVEST, an activity managed by DAI. DAI, in turn, put out an Expressions of Interest (EOI) for approaches to catalyze investment. Out of the 40-odd EOIs received, about 10 were invited to submit an RFP, out of which four awards were made (the other two were Pomona Impact and Aceli Americas).

The “financial value chain” is something we discussed when I was at Calvert Impact Capital. It's how money gets from investors to the end users. Here is an example using microfinance from a Symbiotics report (see p. 13):

In a lot of agricultural value chains, we talk about disintermediation, taking out the “middlemen” so we can pass on more value to the smallholder farmers. In the financial value chain, it can be argued that we need more intermediation. We need more ways to efficiently bridge traditional capital markets to investments in developing countries. I think there is a lot of discussion about the end borrowers and investors, but not as much about the funds and institutions necessary to bridge the two groups together.  As Beth Bafford once said, “I want to talk to you about plumbing.”

In the same conversation, I will often hear the desire to support new, innovative approaches and at the same time the need to achieve scale. Those two things don't happen at the same time and also typically occur in different parts of the financial value chain ecosystem. As described in this Calvert blended finance primer, there will be different players who support early-stage companies with equity to prove their model, mid-stage investors to support growth and late-stage debt investors to help them scale. If we want to focus on scale, we may want to focus on things that already exist and help them grow. If we want to focus on innovation, we might want to acknowledge that these are pilots we are testing and that we don’t know which ones will succeed.

Within impact investing (which, for me, is just another term for development finance), there are “two key ecosystems that have emerged — one rooted in philanthropy and the other grounded in capital markets.”  The first one is focused more on innovation and leveraging the work being done by development organizations. It often targets “specific populations and challenges,” which makes it difficult to scale. The second is also mission focused, but “is working to match the needs of communities with the needs of the markets to move capital through market infrastructure at scale.” Any type of change at scale is likely going to require a change to the system versus scaling any one activity.

In my current job, I have started thinking about intermediation in a new way, i.e., related to USAID procurement. USAID has a goal to work with more local organizations, but that “doesn’t mean traditional contractors are out.” The challenge is that local organizations may not have the capacity to handle USAID compliance requirements or the ability to accept the large contract amounts USAID may award.

One approach to addressing this challenge is the INVEST activity. INVEST was awarded to DAI. DAI was the second highest recipient of USAID contacts, i.e., “acquisition partners,” in fiscal year 2019. At first, it may seem strange to use this as an example of how to reach smaller organizations, but in this case, DAI focuses on channeling money to other implementers and not implementing themselves. In other words, they serve as a more streamlined procurement process to reach new partners, underutilized partners and local organizations.

To me, this seems similar to the way investment funds work. The DFC wants to support SMEs but the loan sizes are too small to make directly, so instead, the DFC can make a larger loan to a specialized investment fund who then lends to the SMEs. In a similar way, smaller organizations may not be able to apply directly for a large USAID activity, but they can apply for a subcontract through the INVEST activity.

Where Does Agriculture Finance Sit at USAID?