In 2015, Mercy Corps released some surprising findings from conflict management programs in the Horn of Africa. Interventions from 2013 to 2015 focused on building community-level cooperation, strengthening institutions and enhancing resilience. The findings indicate that natural resource management can be a key governance pillar to build around, and such cooperation can strengthen household resilience to climate and food security shocks. [Video Below]

“In order to get resilience right in these fragile and conflict-affected states, greater investments in peacebuilding are needed,” said Jon Kurtz, director of research and learning at Mercy Corps, at the Wilson Center in 2016. Kurtz was joined by Daniel Alemu of Mercy Corps and experts from the U.S. Department of State, U.S. Agency for International Development (USAID) and Clark University to discuss Mercy Corps’ findings and propose ways forward in peace and resilience programming.

The Mercy Corps report, Pathways From Peace to Resilience, concluded that household food security is heavily affected by economic and climate-related shocks, as well as continuous conflict. Through the strengthening of social and institutional systems and conflict-management skills, the effects of these shocks can be mitigated, improving household resilience and creating means to negotiate communal tensions. Mercy Corps and USAID’s Communities Helping Their Environment and Land by Bridging Interests Project (CHELBI) project, based in southern Ethiopia, was the first of several programs to test this approach.

CHELBI utilized people-to-people consultations, resource mapping techniques and outside actors and institutions, such as research centers, local leaders, government figures and development organizations, to pinpoint shared community concerns regarding natural resources. Communities formed management plans for the use of shared resources and participated in environmental awareness programming. “We ensure that that joint community discussion goes to joint action,” said Alemu, who directed the project.

Building off of their findings, Mercy Corps has implemented similar capacity building and resilience projects in northern Uganda.

An important lesson of this work was that strengthening institutions that impact the peace process is more effective than focusing on inter-ethnic cooperation itself, said Kurtz. Policymakers must “push beyond this dialogue among people-to-people and really invest in institutions,” he said.

On the food security front, local leaders’ perceived ability to mitigate conflict and communities’ perceived ability to negotiate the sharing of natural resources was linked to lower levels of household hunger. Surveys in the Mandera Triangle found greater movement ability, more dietary diversity, and lower distressful coping strategies, such as borrowing food. These results are challenging, said Joan Whelan, senior policy and learning officer in the Office of Food for Peace at USAID, because they are indirect.

The Office of Food for Peace has long understood violence affects their work, said Whelan, but we have “struggled with how to integrate conflict into our framework. We are food security actors… We speak in a language of food security.” They are just beginning to incorporate conflict-sensitive strategies that “address people, groups and institutions themselves,” rather than just supply, she said.

The relationships between these levels of society can contribute to more effective food programs. The participation, transparency and accountability of institutions can minimize the potential for conflict in crisis situations since affected actors are able to voice their grievances and express their ideas, and service providers are able to more fairly and effectively address them.

Sharon Morris, deputy assistant secretary of state with the U.S. Department of State’s Bureau of Conflict and Stabilization Operations, said that Mercy Corps’ research helps “disentangle not just that peacebuilding helps support resilience, but that certain types of peacebuilding do.”

Morris gave the example of the Niger Delta, where violence and governance tensions influence the work of humanitarian and development assistance. “How do you do an economic development program or a food security program that’s focused on market principles if every economic asset is something that people need to fight over?” she asked. The report can help guide agencies in understanding how certain interventions to promote resilience and food security in areas of conflict actually play out.

How to take successful programs to scale to make a much wider impact, however, remains a challenge. Morris noted that the research done by Mercy Corps could be helpful elsewhere in Ethiopia, the Horn of Africa, and beyond. 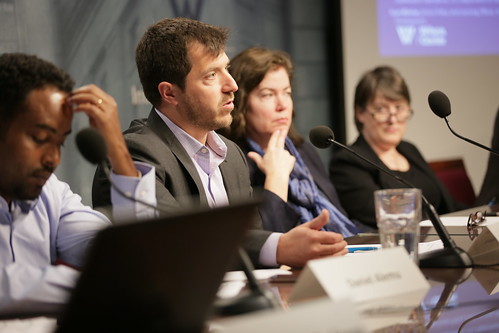 Ed Carr, professor and director of the International Development, Community and Environment Department at Clark University, said “Mercy Corps needs to be commended for trying to get at a complex question like this.”

“Livelihoods are not just a way people make a living,” said Carr, they are “ways of ordering the world” and “how people live in particular places.” This makes the task of building resilience in vulnerable communities very complex.

Carr challenged development actors to think more critically about the concept of shocks, suggesting a need to differentiate between “normal” shocks and “abnormal” shocks. Normal shocks are cycles and events that communities are accustomed to dealing with, Carr said. Locals in southern Mali, for example, where Carr has done research, did not note variable rainfall as an issue of top concern, despite the fact that his team anticipated otherwise. “The rainfall is always variable,” he said, and thus it is “not a meaningful question.”

“Livelihoods,” Carr said, “are built for normal shocks.” Abnormal shocks, in comparison, are what need to be addressed in resilience-building projects in conflict zones: those things “outside normal expectations or parameters.”

Carr said the challenge for Mercy Corps – and development and stability efforts everywhere – is to establish a baseline for shocks. This would help measure the true impact of interventions. “We have to think about what kinds of shocks we are talking about,” Carr said. “To some degree, conflict and violence are going to fall into this realm” of normal shocks, he said; in some cases, conflict is itself a livelihood decision.

The panelists said there’s a need for improved coordination within and between agencies to understand the interaction between development and conflict and how to incorporate peacebuilding.

Though coordination can take a long time and great effort, said Whelan, “we can do things now that we weren’t able to do before.” She did note, however, that with coordination comes a need for agencies to stick to their respective topics and capabilities to avoid inefficiencies.

Morris does not see significant improvement between donors happening any time soon. “It’s hard enough to coordinate within our own [U.S. government agencies],” she said. “What you have to do is you have to help all the donors understand that if they do their work this way, they will get better results… We are shifting toward a model of coordinating and the dissemination of knowledge, rather than trying to make people do stuff when none of us really understand if what we are doing works or not.”

Mercy Corps’ research and others like it are beginning to build a shared understanding of concepts among organizations that makes it easier to disseminate lessons learned and move the field forward, said Carr. “People are not necessarily doing that… We have to start somewhere.”

The panelists noted that academia is largely absent from the conversation. Carr credited this to incentive and funding structures that limit researchers’ abilities to become involved. Academic thinking is often not understandable to the policymakers who are tasked with implementation. “It’s not just about having the right people,” said Morris, “it’s about having the right ideas for those people to move forward.”

Kurtz noted the need for more creativity when it comes to funding. Mercy Corps’ experience shows that programs ostensibly designed around natural resources can have effects on governance, food security and conflict, he said. Yet aid money tends to be funneled to one sector or the other, and measurements of success are similarly narrow. He particularly noted the potential for natural resource management-based programs to be effective in Food for Peace’s work on food security.