Over the last year, I’ve resigned myself to accept some things I'm not good at, including developing a theory of change or coming up with new ideas. On the other hand, I’m more fully embracing my role of “explainer.” My goal is to try to learn what's already out there and then try to make it easier to understand, or as Washington Post journalist Margaret Sullivan recently wrote in an article about Dan Diamond, to “synthesize rather than provide new information.”

There are basically two groups I want to talk about: 1) smallholder farmers and 2) agricultural small and medium-sized enterprises (SMEs). However, that turned out to be too long for one blog so I turned it into a five-part miniseries. This is part one, where we’ll go over a well-known smallholder farmer segmentation and talk about the top of the pyramid, commercial farmers in tight value chains.

(One acre is about the size of an American football field. Did you know that the definition of an acre comes from how much you could plow in one day with oxen?)

This segmentation from the Consultative Group to Assist the Poor (CGAP) is from 2013, but I think still very helpful: 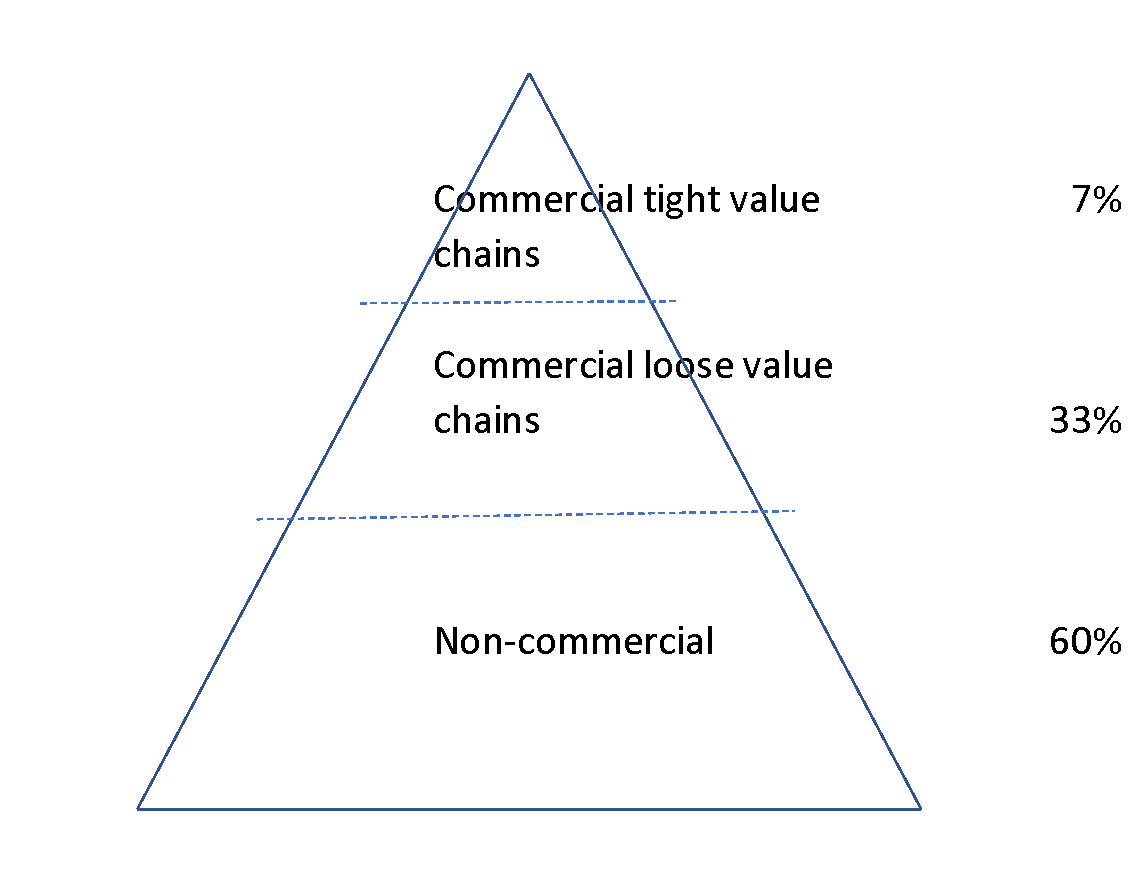 Note that CGAP did not present the segmentation as a pyramid. I only did that because I thought it was easier to visualize, similar to how Initiative for Smallholder Finance advisors did in one of its reports (page 5).

At the top of the pyramid sit commercial farmers in tight value chains. These farmers often grow cash export crops such as coffee or cocoa and belong to a cooperative. While smallholder farmers are estimated to produce 30 to 35 percent of the world's food supply, the percentage in certain sectors is much higher. An estimated 25 million smallholder farmers produce around 70 percent of the world’s coffee.

As a group, 25 million farmers represent just 5 percent of the estimated total 500 million smallholder farmers. Some people may look at that and see a huge opportunity to finance the other 95 percent of smallholder farmers. However, and not surprisingly, smallholder farmers in tight value chains such as that for coffee are among the easiest to finance and even within the 25 million, there is further segmentation.  This report (page 20) estimates that only 1.5 million smallholder coffee farmers are in tight value chains which would give them access to financing from the type of social lenders who belong to the Council on Smallholder Agricultural Finance (CSAF). CSAF member loan disbursements in 2020 totaled $559 million to 649 businesses which reached 1.2 million farmers. Of the $559 million, 53 percent or $295 million was for coffee.

Segmenting the Ag Finance Market, Part 2: What Can We Learn From Microfinance?

Segmenting the Ag Finance Market, Part 2: What Can We Learn From Microfinance?

African Agriculture Is Ripe for Investment: An Interview with Tomato Jos