This post is written by Kathleen Merrigan, Executive Director for the Swette Center for Sustainable Food Systems at Arizona State University and former Deputy Secretary at USDA.

The forthcoming 2021 United Nations summit will focus on food systems, exposing global leaders to the power of a food systems framework, particularly as it relates to policy choices in the food and agriculture sector. As FAO explains, this summit will allow for greater understanding of the complex interactions, dependencies and trade-offs intrinsic to food systems, and in doing so, help societies manage complexities and achieve the Sustainable Development Goals (SDGs). For practitioners working on nutrition, agriculture, climate and food security concerns, this broadened and interconnected focus should be a welcomed change from previously siloed discussions.

The topic could not be timelier. I expect the current crisis will elevate the importance of food systems thinking and approaches to policy, including issues related to nutrition and hunger alleviation.

So, what do we mean by food systems? This is a good illustration to jump-start conversation. Essentially a food systems approach broadens the frame of what is under examination and seeks to understand how an issue is embedded in the larger system. For many of us in the nutrition field, the middle of the diagram may be most explanatory, depicting the pathway from a narrow focus on nutrients, to a broader focus on foods, to an even broader focus on diets. And of course, this is a simple diagram that does not encompass all considerations – some that may have already popped into your head -- and this is represented by the outside band that simply says food systems. 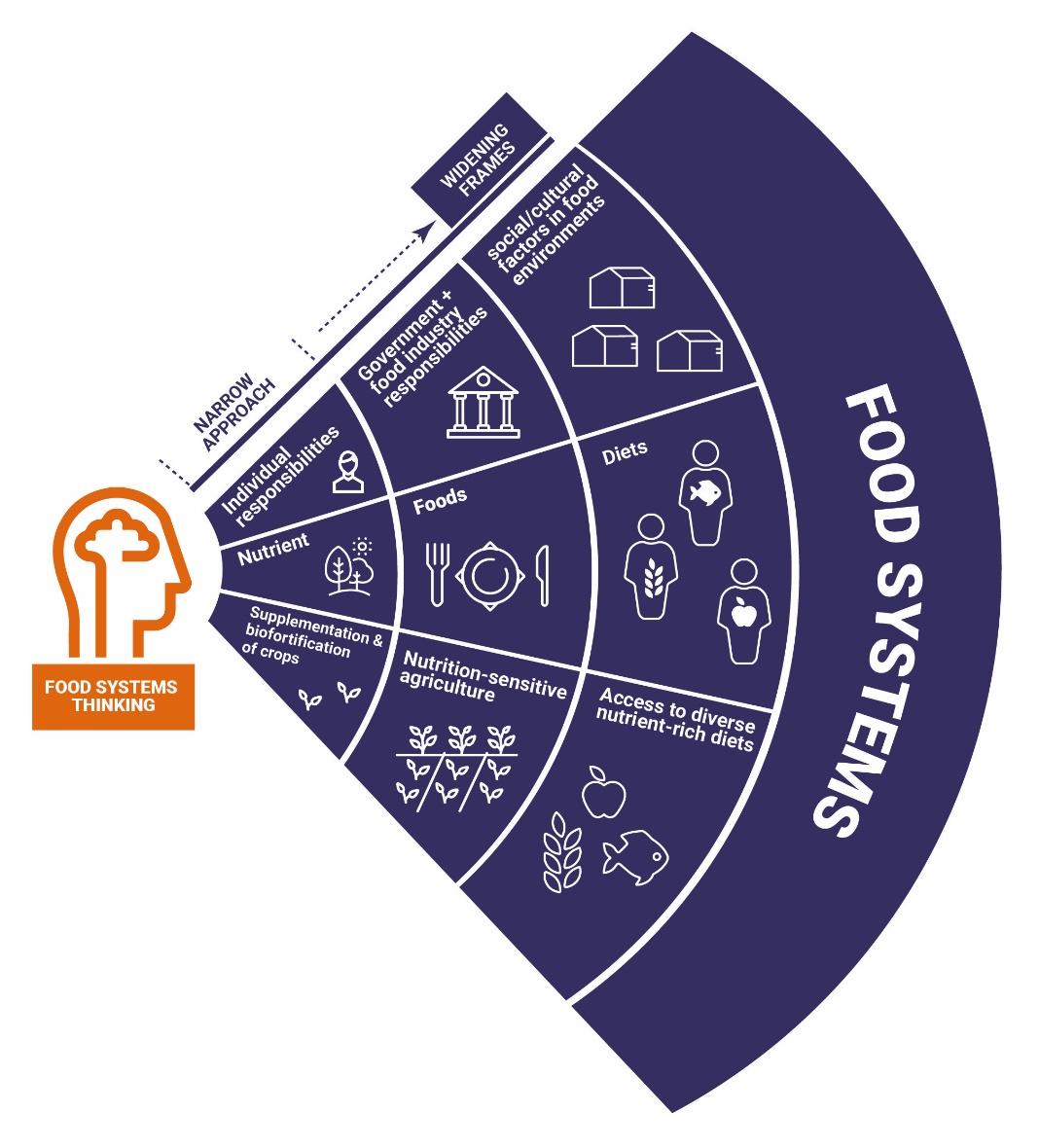 Illustration from TEEB AgriFood, Chapter 4, Figure 4-12, as adapted from IPES-Food 2017

Food systems is a relatively new field of study, but one that has taken hold in many U.S. universities, as well as around the world. As the field grows, so does the number of practitioners. I think back to 15 years ago, when one of my doctoral students wanted to write her dissertation on food systems, and I said no. There was no set discipline, no clear path, no literature to contribute to – it just seemed too hard. Was I ever wrong! I didn’t foresee the explosion in food system work or my role in championing it. At Arizona State University, for example, we offer a BS and MS in Sustainable Food Systems. For several years, Columbia University has hosted a community of practice for university professors to collaborate on food systems pedagogy.

Today, I run a research center dedicated to food systems. Like degree programs, food systems research has taken off and it is fast becoming a competitive field. Swette Center Research Professor Arthur Getz Escudero, joined several coauthors in a European Commission- sponsored synthesis of food systems studies and research projects in Europe that provides a glimpse of what is going on in this field. Perhaps a good proof point to demonstrate the energy and excitement for food systems thinking is the current Rockefeller Foundation Food System Vision Prize 2050 competition that seeks to identify, and fund, the most promising work to achieve sustainable, nourishing diets. Over 1,300 submissions were received from across the globe.

Food systems thinking is central to two current public policy efforts of note. First, there is a universe of efforts known as True Cost Accounting (TCA) in which people are applying food systems thinking to determine the true cost of food. One such effort has been led by the United Nations Environment Programme, TEEB AgriFood, which has engaged more than 150 scholars across 33 countries in an effort to come up with a common framework for assessing and valuing externalities of food production, both positive and negative (well described in this Nature commentary). What drives TCA efforts is the fundamental belief that neither we, nor our policymakers, can make good choices if we don’t have all the facts in hand. The idea here is not to argue that food is too cheap – we have 820 million people struggling with hunger at current costs -- but rather to increase transparency and provide full information that empowers decisionmakers.

Today, much of the TCA work is sponsored by the Global Alliance for the Future of Food, with many studies underway to finetune the methodology. My own hope is that TCA, once fully explicated, will bring a new level of analysis for global leaders on agricultural production systems which, for example, helps to clarify where across the supply chain adjustments can be made to improve sustainability.

A second example of food systems thinking at work is seen in the current U.S. debate over the Dietary Guidelines for Americans, due to be released this year. Many organizations have urged the Secretary of the US Department of Agriculture and the Secretary of Health and Human Services to take into account sustainability concerns when issuing dietary guidance, as has been done, most notably, in The Netherlands and Brazil. The idea here is that dietary guidance should not be developed in a vacuum; rather governmental guidance needs to be developed within the broader context of the entire food system – which includes considerations of environmental constraints and social dimensions, including equity and food access.

I’m excited for the UN Food Systems Summit and look forward to collaborating on food systems thinking with colleagues across the globe.

COVID-19 and Its Impact on Cacao Demand: A View from Peru