Where Does Agriculture Finance Sit at USAID? One way I describe my job is to be a switchboard for people trying to navigate the agency. Or to mix metaphors, I liken myself to one of those touchscreen directories you find in some U.S. shopping malls. So, whenever I write anything about USAID, I find one of the prerequisite things I need to do is explain how we are structured and where I sit. To stay true to form, that’s what I will do here. Also, now when I have an introductory call, instead of repeating the same thing, I can just point them to this blog.

The first thing I’ll often say is that we are a decentralized organization. That means most of the budget and decision-making is done at the country level where we have offices called “missions,” which I have circled in red in the organizational chart below. 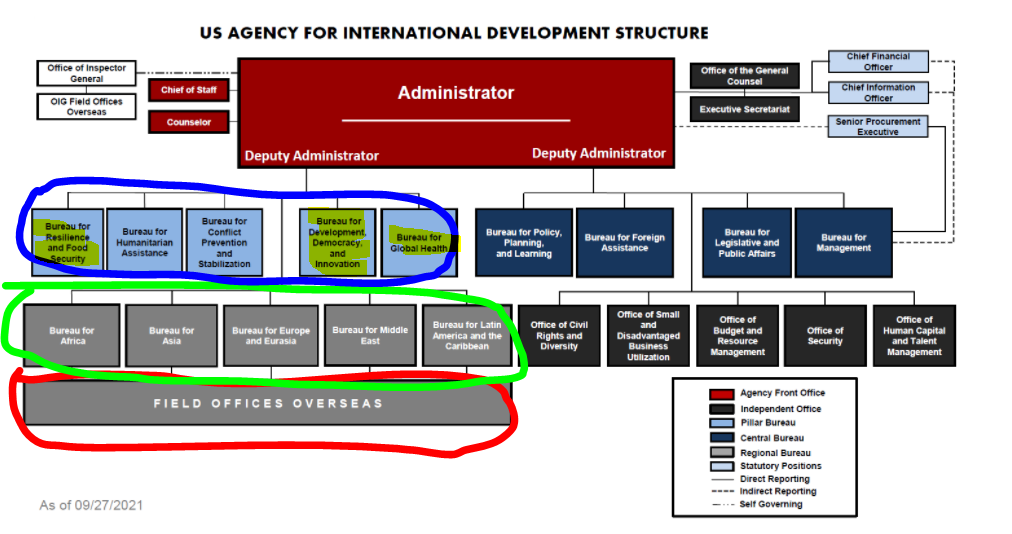 If the ag finance team in Washington, D.C. wants to fund an activity that works in another country, we will need to explain how it aligns with that country’s priorities, as described in their Country Development Cooperation Strategy (CDCS). If you are an organization that wants to work with USAID in a particular country, I would advise you to check out their CDCS.

In Washington, D.C., there are functional and geographic bureaus. The geographic bureaus are circled in green. I circled the functional bureaus blue, but let’s focus on what I describe as the three “pillar technical bureaus,” which are highlighted in yellow. This is my shorthand for them, along with their official names: 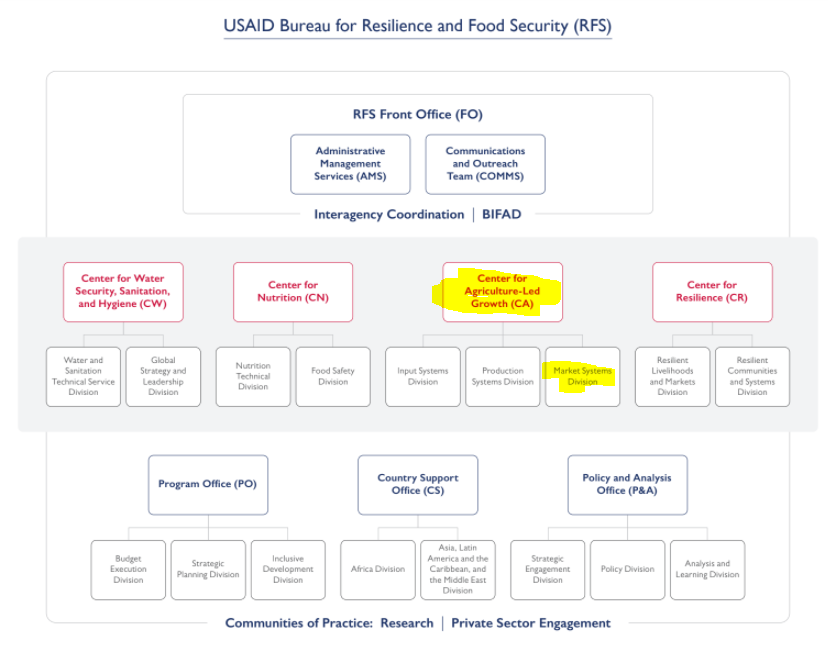 In addition to CDCS, another helpful acronym to note is Automated Directive System (ADS), which describes the agency’s operations. For example, you can find a description of our center and its three divisions on pages 95-96 in ADS Chapter 101.

Here is the summary version of where I sit: Something I also want to mention that I didn’t appreciate or even really know before I started, was that there are many ways to be hired into USAID and that the agency has the second highest number of foreign service officers after the Department of State. I bring the latter up because that means people rotate often. Also, you have your political appointees who will likely change with each new administration. This is all in addition to the regular turnover you would have at any organization.

While we are here, I thought I would also give a quick rundown on the DFC, which is the U.S. agency I work the closest with. 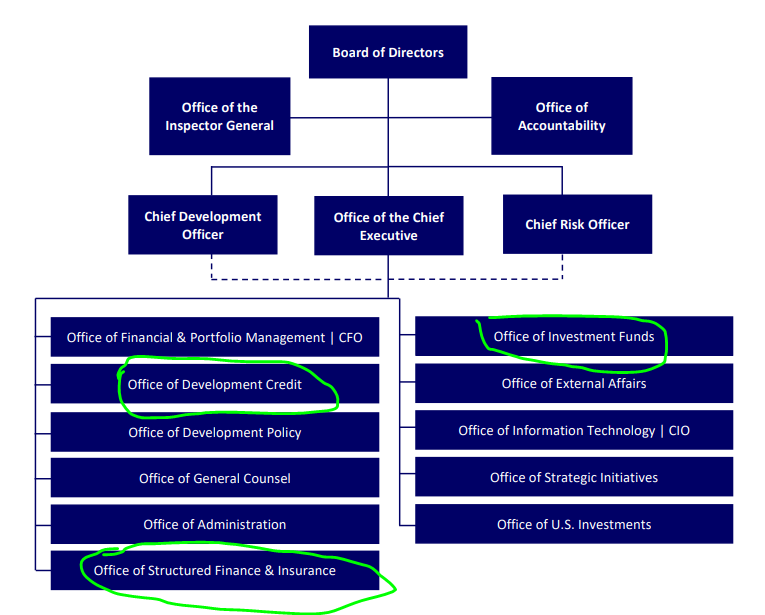 There are three primary “originating units” at the DFC, circled green in the organizational chart above.

Of particular interest to USAID is the Mission Transaction Unit (MTU), which sits in ODC and is circled in blue in the organizational chart below. The MTU, formerly the Development Credit Authority (DCA) at USAID, is USAID’s transaction window at the DFC. Each regional team in the MTU covers one of the pillar technical bureaus at USAID. For example, the Africa team in the MTU covers RFS. I am the DFC liaison for RFS and my counterpart in the MTU is Patrick Starr on the Africa team, circled in green below. In addition, RFS also provided financial support for the creation of the Food Security Unit, led by Yasser Toor, highlighted yellow in the chart below. 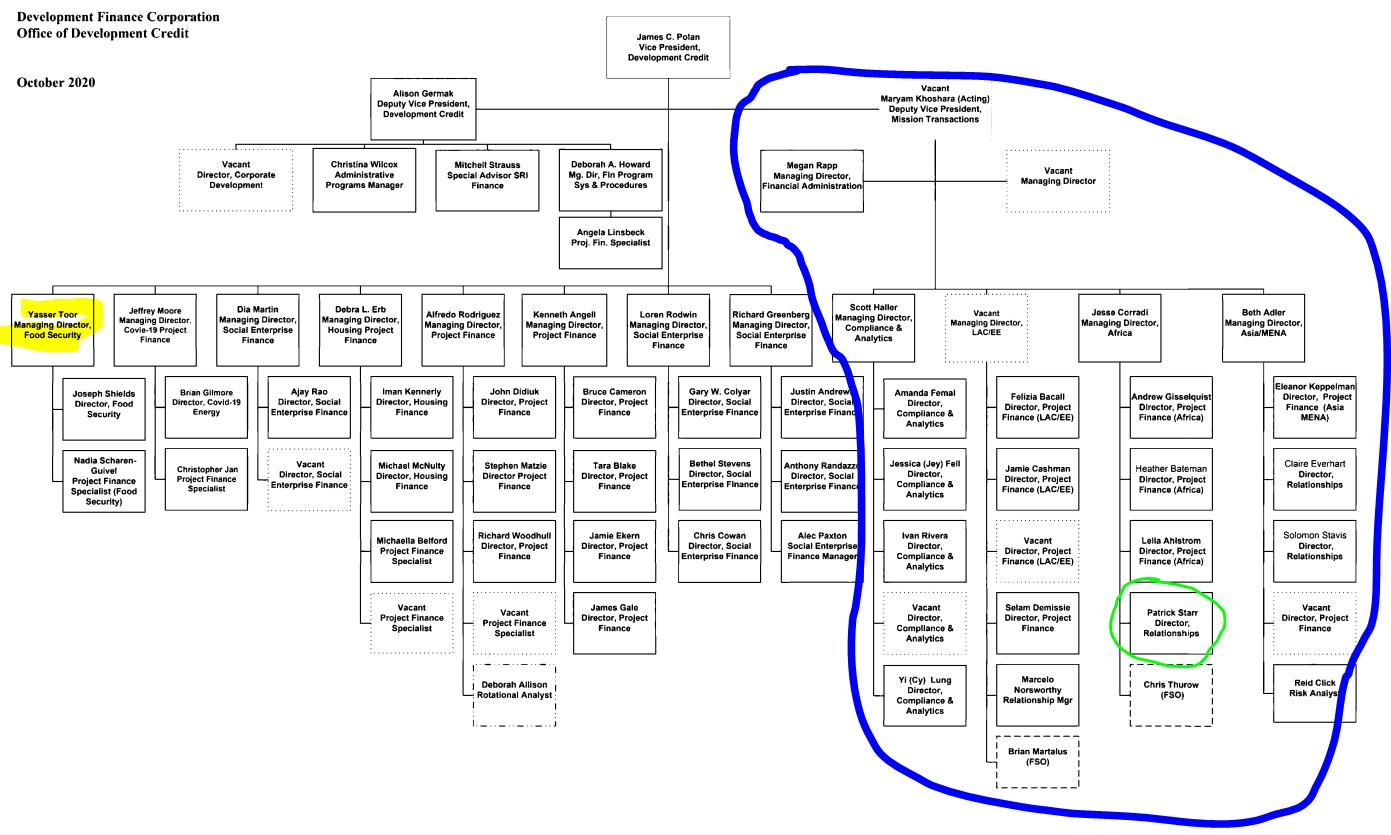