Sowing the Seeds: How One Gathering Led to Increased Agricultural Educational Opportunities for Youth in Ghana and Liberia Every international development project that works on human and institutional capacity development tries to plant seeds of change. The USAID-funded Feed the Future Innovation for Agricultural Training and Education (InnovATE) project has recently seen one of its seeds grow into increased agricultural educational opportunities for youth in Ghana and Liberia through a found partnership with AgriCorps.

RUFORUM Side Event — The Seed Sown

The proverbial sowing of the seed was a side event at the Biennial Conference of the Regional Universities Forum for Capacity Building in Agriculture (RUFORUM) in South Africa in October 2016. The event was titled, “Positive Youth Development and Experiential Learning in University Outreach.” InnovATE brought together 4-H and university leaders from Ghana, Liberia, Senegal and Tanzania. The presentations emphasized opportunities for university faculty members to provide agricultural technical guidance and experiential learning programs for community engagement of rural youth by 4-H.

InnovATE intended for this event to be the fertile ground for relationships to sprout between 4-H groups and universities. For example, “I knew that 4-H Liberia wanted to work with the University of Liberia but that relationship never developed,” explained Larry Vaughan, InnovATE’s director and facilitator for the event. “So, I asked 4-H Liberia and the University of Liberia to do a joint presentation on opportunities for collaboration to get them thinking together.”

The 4-H and university leaders agreed before they left South Africa that they would sign memoranda of understanding (MOUs) to collaborate when they returned to their home countries. The seed had sprouted. However, without activities on the ground in those countries, InnovATE did not have the means to tend to the growing relationships.

However, there was another partner working to help cultivate those relationships. AgriCorps works with the national 4-H organizations in Ghana and Liberia. Its mission is to “connect American Agriculture professionals to the demand for experiential, school-based, agricultural education in developing countries.” AgriCorps recruits American college graduates in agriculture with FFA or 4-H experience to teach agricultural education for one year in a developing country. AgriCorps works with 4-H in collaboration with local education systems. Universities will now become part of these efforts after InnovATE sparked the relationship between universities and 4-H organizations.

At the InnovATE event, 4-H Ghana, the University of Cape Coast (UCC) and the University for Development Studies (UDS) agreed to pursue collaboration agreements. AgriCorps helped to facilitate the agreements and became another partner in the implementation of the plans. MOUs were signed in May 2017. The partners agreed to connect the universities’ extension students with 4-H programs in schools and communities in order to disseminate research results to local communities. For its part, AgriCorps will have two Fellows work with students and faculty members at the University of Cape Coast and help 4-H implement the agreements.

4-H’s positive youth development approach in agriculture education is needed in Ghana. Fifty-seven percent of the population is under 25 years of age, and agriculture engages 45 percent of the labor force (Source: CIA Factbook). Many young people in Ghana have a negative perception of agriculture — that it is for illiterate, poor people and not a promising venture to pursue.

Having university students work with 4-H students and communities will address some of the poor perceptions of agriculture. 4-H Ghana’s executive director, Appiah Kwaku Boateng says, “[University] students, while encouraging the youth to pursue agriculture at all levels, are also motivated and see the potential in agriculture as a business. This brings about cross fertilization of ideas on agriculture between the students of the University and 4-H members in the communities.”

While the university students are exposed to the positive youth development approach of 4-H, the AgriCorps Fellows also have the opportunity to tap into the knowledge, skills and energy of the university extension students. The partnership exposes Fellows to university level agriculture, and work with ministries, according to John Romo, AgriCorps Director of Programs in West Africa.

Additionally, 4-H-Ghana is extending its reach into the three northern regions of Ghana where UDS is located. Each academic year, UDS sends about 8,000 students into 800 rural communities in about 20 districts in Ghana for eight weeks through its practical field requirement. Working with UDS allows 4-H Ghana to branch into new geographic areas strategically. 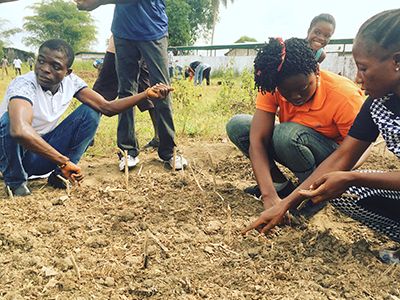 InnovATE’s request for a joint presentation brought together AgriCorps and 4-H Liberia with the University of Liberia. The plan developed jointly by all three organizations proposes to revise the curriculum in the department of agriculture extension education to include tenets of positive youth development and outreach to 4-H programs. While an MOU has yet to be signed, collaborative activities are still moving forward.

As a result of the work done together for the InnovATE event, AgriCorps Liberia Country Director, Melissa Tabke, was asked to teach a course at the University of Liberia for agriculture extension students. As part of her course, the students interned with 4-H Liberia and 4-H clubs. According to Tabke, such internships with young people taking leadership roles are hard to come by in Liberia. It was a huge opportunity for the students. The plan is to offer extension students internships through 4-H that last an entire semester.

Because of the success of their work with the University of Liberia, AgriCorps and 4-H have started working with Cuttington University. Next academic year, an AgriCorps Fellow will be assigned to work there.

Part of what InnovATE does is to conduct workshops and symposia like the RUFORUM event to bring people and organizations together. We try to prepare the ground and plant some seeds. Romo said that InnovATE was able to paint a picture for 4-H Ghana and the universities of what a collaborative relationship might look like. Tabke said that InnovATE’s activity at RUFORUM was a good kickstart to a relationship between 4-H and the University of Liberia that had stalled years before.

As any farmer knows, planting a seed does not guarantee it grows. A sprouting seed needs to be tended. In this case, the seeds that sprouted into new relationships at the InnovATE event were nurtured back in their home countries through the collaborative efforts of the national 4-H organizations, the universities and AgriCorps. The results are shared knowledge and skills, more positive youth development and more agricultural educational opportunities for young people in Ghana and Liberia.

Visit the Activity Page for Innovation for Agricultural Training and Education

Youth Programming Across Contexts: The Journey to Employment

Collaborating with Agricultural Academic Institutions in the United States: Opportunities for India

Preparing for the Future of Agriculture through Career Exploration