This post is written by M. Gulam Hussain with the Feed the Future Innovation Lab for Fish, and originally appeared on their website.

Hilsa, Tenualosa ilisha, is a large anadromous shad that is the national fish of Bangladesh. It is a very popular food fish in the country. The fish has enormous benefits for human health due to its availability of essential micronutrients, minerals, and polyunsaturated fatty acids (i.e., omega-3 fatty acids) in its flesh and other edible parts of the body. At present, 50-60 percent of the global hilsa catch takes place in the coastal and marine waters of Bangladesh, 20-25 percent in Myanmar, 15-20 percent in India, and the remaining 5-10 percent in other countries (Hossain et al., 2014).

Previously, it was not clearly known how many independently breeding populations were available in Bangladesh. Therefore, during 1980-1982, the Bangladesh Fisheries Research Institute (BFRI) conducted a population genetic structure study of hilsa throughout the geographical ranges in parts of Asia, including Indonesia, Kuwait, and Myanmar, but focusing mainly on Bangladesh under the technical assistance of the Commonwealth Scientific and Industrial Research Organisation (CSIRO) in Australia.

In that study, sequence variations in five genes—Idh-l, Idh-m, Mdh-l, Mdh-m and Pgm—were analyzed from fish livers and muscle with a technique called starch-gel electrophoresis.  Although levels of variation were low, no significant differences in allele frequencies were detected within Bangladesh or Bay of Bengal (southeast India and Myanmar) samples  (Figure 1). This study revealed that the Bay of Bengal comprised a single population of hilsa shad (Salini et al., 2004). 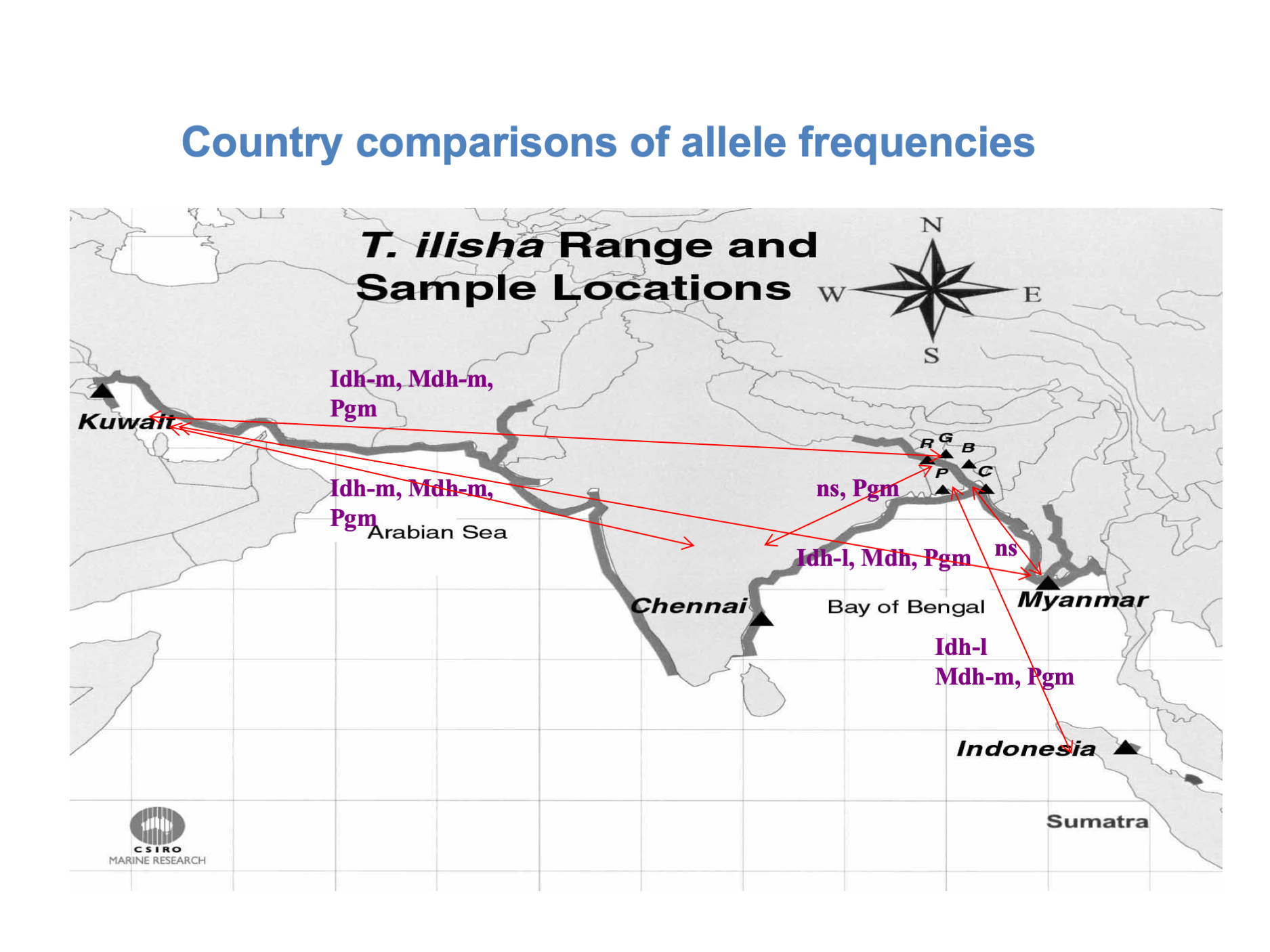 No other hilsa population has yet been clearly identified after the BFRI study. To further promote the hilsa fishery, its biotechnology and genomic studies, and its ecology and biodiversity in the coastal and marine waters, BFRI, the Department of Fisheries, Bangladesh Agricultural University, the University of Dhaka, and WorldFish have implemented effective research and development projects/programs in partnership with the Bangladesh Ministry of Fisheries and Livestock.

Hilsa represents greater than 12 percent of the total fish production in Bangladesh, but this has not always been the case. In 2000-2001, hilsa production was very low at 0.2 million tons per year; therefore, the government of Bangladesh requested BFRI to formulate the Hilsa Management Action Plan, which was implemented by the Department of Fisheries in 2003.

This plan was designed to help with conserving natural hilsa breeding grounds and protecting young hilsa, known as jatka, through periodic fishing bans. These bans, which originally included 10-22 days during October and recently added up to 60 days in March and April, apply to all the hilsa-spawning water bodies (selective southern rivers, coastal, and marine waters). Through these regulations, Bangladesh was able to achieve sustainable growth of hilsa production, and production in 2017-2018 increased to 0.52 million tons.

The Hilsa Fishery Management Plan of Bangladesh could be a good lesson in well-planned fisheries management for the recovery of an economically important fish species.

M. Gulam Hussain is the Bangladesh Country Coordinator at the Feed the Future Innovation Lab for Fish and the former Director General at BFRI.